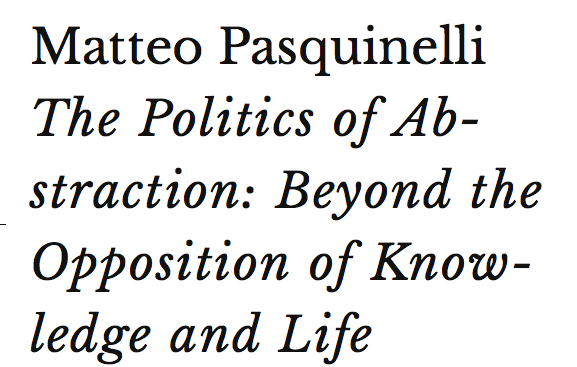 Matteo Pasquinelli is a writer and academic researcher. He completed his doctorate with a thesis on the new forms of conflict within knowledge economy and cognitive capitalism. He wrote the book Animal Spirits: A Bestiary of the Commons (2008). He writes and lectures frequently at the intersection of Italian operaismo and French philosophy, media theory and life sciences. He contributed to journals and newspapers such as Springerin, Multitudes, Fibreculture, Lugar Comun, Liberation, Il manifesto, Der Freitag. Together with Wietske Maas he wrote the Manifesto of Urban Cannibalism.

Matteo Pasquinelli is advocating a paradigm where the opposition between body and mind, between bios and noos, between life and knowledge will eventually vanish.

Over the past number of years, the general discourse in both art and political philosophy have swung along a specific oscillation, alternating between an emphasis on a knowledge-based economy and a desire-based economy, between immaterial labour and affective labour, and between the rise of general intellect (Marx) and the long shadow of an ancient biopower (Agamben). No artistic or political agenda has been immune from this oscillation, often polemically pitting one pole against the other. The so-called linguistic turn, for instance, which focused on the shift towards knowledge economy and network society, led to a subsequent shift toward affective labour (rediscovering the field of struggle of domestic labour that actually was initiated by feminism in the ’70s).

Paradoxically, it was during the period of digital aesthetics that “the bios”1 first took centre stage, situating itself somewhere between an obsession for naked life (Agamben) and a general suspicion of the latest biotechnologies. However, we continue to hear complaints about a political philosophy that emphasises cognitive labour over the corporeal sphere of libido, desires, affections, etc. Yet capitalism itself shows no compassion for what Deleuze and Guattari termed “desiring production”: capitalism continues to evolve towards evermore sophisticated and abstract algorithms that allow it to maintain its control over social networks, global logistics, and financial transactions. Needless to say, it remains a never-ending dispute.

In my effort to put a stop to this constant oscillation, I am advocating a paradigm where the opposition between body and mind, between bios and noos, between life and knowledge will eventually vanish (like it has always managed to disappear in authors like Spinoza, Merleau-Ponty, Canguilhem, Foucault, Deleuze and Guattari). In order to debunk these kinds of binaries and their crystallised vocabularies I want to show how the roots of Foucault’s concept of biopolitics, interestingly enough, are linked to the research on neurology by Kurt Goldstein.

Foucault offered an early definition of “biopower” in his 1975 university course The Abnormal at the Collège de France. Foucault here revealed his interest in the “normalisation of sexuality” and the institutions and apparatuses in charge of this task. Across modernity Foucault identified then a form of power that is not exercised through traditional techniques of repression of sexuality but through a positive production of knowledge about sexuality. This allowed Foucault to distinguish between the domains of the Law and the Norm.

The curious fact is that Foucault’s notion of normative power was inspired by the philosopher and physician, Georges Canguilhem, who, in turn, borrowed this idea from the neurologist Kurt Goldstein and then applied it to the social sciences.3 Goldstein describes normative power as the ability of the brain (and the organism as a whole) to produce new norms and habits that allow it to adapt to the environment or respond to traumas and diseases.4 The uncanny silhouette of a living being, which serves as the structure for Goldstein’s organism, can be detected in Foucault’s words: “a power that possesses within itself the principles of transformation and innovation”. But in Goldstein the epistemology paradigm was reversed compared to Foucault’s reading: Goldstein believed that knowledge was originated by the organism itself rather than affecting it just from the outside. This epistemological turn is further illustrated by the implicit dialogue of the two titles: Canguilhem’s Knowledge of Life5 was conceptually reversed a decade later by Foucault’s The Will to Knowledge,6 which reveals a drift from knowledge as an expression of life to knowledge as an expression of the power upon life. So, at its original core, biopolitics was in fact noopolitics.

Goldstein believed that the normative power of the organism was based on abstraction. Abstraction is an organic and logical power that precedes language, mathematics, and science: it is the power to perceive in detail and recognise forms, to simulate different situations, to project our identity beyond its limits, to invent new behaviour patterns to recover from traumas and adapt to new environmental conditions. It is also the power, of course, to manipulate tools, machines and information. Both paradigms – of cognitive capitalism and biopower – must be understood as the exploitation and control of the power of abstraction of our being (and not just as the repression of our physical bodies, which was what Foucault was trying to show too). In this sense, politics should not concern itself with trying to retrieve more body, more affection, more libido, more desire, etc., but should instead focus on developing the powers of abstraction, that is the ability to differentiate, bifurcate, and perceive things in detail, including our own feelings.

We must learn to reverse our superficial fetish for “the living” so we can finally enter the age of neuroscience. It is time to once again emphasise the neurological matrix as the forgotten core of Foucauldian biopower. The essential problem that besets the politics of life is the politics of abstraction. 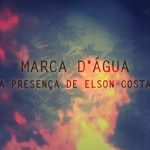